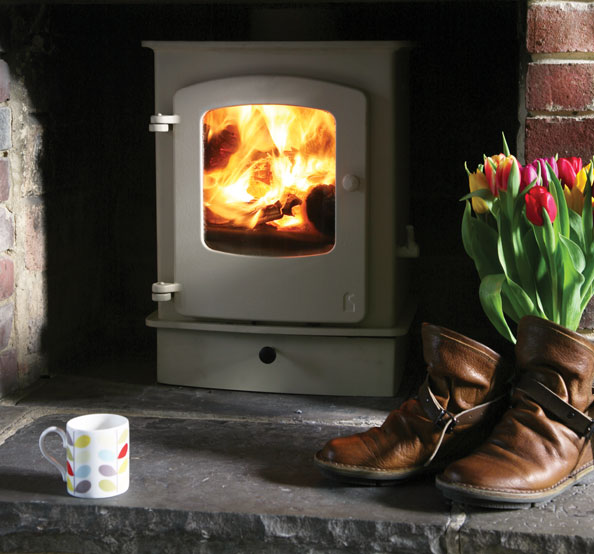 The Cove 1 is the latest addition to Charnwood’s Cove range, which you can see in our fireplace showroom near Fleet in Hampshire. It Features the same distinctive rounded corners and cast iron door as its forebears, this multifuel stove may be smaller in stature than its woodburning kinsfolk, but it shares all their good looks and performance features.

The Charnwood family firm has accumulated over 40 years of experience in the design and manufacture of premium-quality British woodburning and multifuel stoves. Though proud of their pioneering legacy as the UK’s first manufacturers of woodburning stoves, Charnwood have no plans to rest on their laurels, and their willingness to innovate and incorporate the best of modern technologies keeps them at the forefront of today’s marketplace.

With its single curved door and simple, understated profile, the Cove 1 is the quintessential British multifuel stove. Its large ceramic glass window offers a clear uninterrupted view of the fire burning within, and its solid cast- iron and plate-steel construction eloquently expresses the mature, tried-and-tested design principles which transform this stove from a mere heat source to a gracious interior centrepiece.

An adaptable display with sophisticated features

Rated at a nominal 4Kw output, the Cove 1 will comfortably heat smaller rooms and spaces. And its varied choice of bases allows flexible location and display options, ensuring the Cove 1 will look at home in almost any setting. The fire is controlled via a simple push/pull air control, though the revolutionary Quattroflow internal air-management system which drives this process employs a sophisticated combination of four air chambers. A clean-burn ‘airwash’ mechanism preheats and controls airflow within the fire to optimise burning and reduce emissions, whilst also keeping the ceramic glass window clean and the Cove 1 fireglow clearly visible.

The Cove 1 will burn logs up to 300mm (12") long, and uses one multi-function tool to open the door, empty the ash, and operate the multi-fuel converter-grate settings. This latter feature allows the setting of different grate positions for wood and smokeless fuels, and because this adjustment can be carried out externally u2013 even when the fire is in use u2013 this is also an efficient means of riddling the grate to transfer excess ash to the ash-pan below. And when the flue requires sweeping, a drop-down throat plate allows the operation to be effected through the stove.

Available in a choice of eight Charnwood colours, the Cove 1 achieves a fuel-to-heat efficiency ratio of 76.5 per cent. And with the addition of an optional water-heating flue boiler to recover ‘lost’ heat from the flue, its efficiency can be raised still higher. Though woodburning is a renewable source of heating, modern stoves such as the Cove 1 are nevertheless designed to minimise heat escape and the release of harmful pollutants by implementing a ‘double-combustion’ process, whereby volatile gases released during the primary burning phase are burnt off during a secondary burning. This substantially reduces ash residues and minimises harmful emissions, thus preserving a cleaner environment for us all to enjoy.